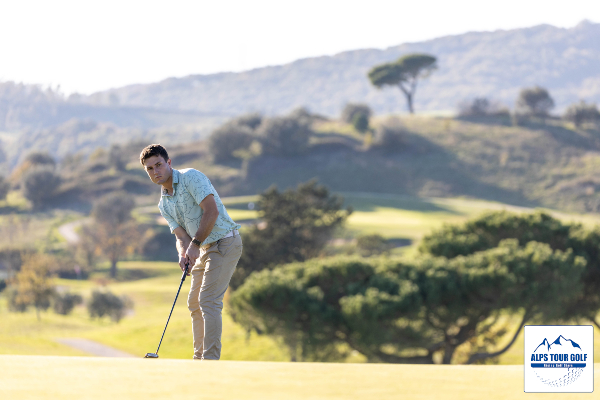 Teeing off on the Terre dei Consoli Golf Club course from the first, the player from Down Under started in style with a birdie. He finished the first nine with three more, started the back nine with another birdie, dropped a shot with a single bogey but recovered with three more birdies coming home.

“I’m confident with the putter. The putter and the driver in fact but it’s all about the putting here as it’s quite wide off the tee. I holed a lot of putts today and that’s always gonna get it done, isn’t it? So far, I’m doing everything pretty well so I can’t complain”.

Winner last week on the Golf Club Parco de’ Medici course, he heads into the final round at the Golf Nazionale with the same approach:

“You’ve got to plot your way around the course. It’s going to be soft as I’m sure the grass is still wet there. So, just put yourself on the fairway and try to give yourself as many birdie opportunities as possible”.

Two strokes behind him on the same course, preserving his second place from yesterday is the American Blaire McKeithen. He had a grand total of 7 birdies and would have been joint leader if not for two bogeys on each nine to give him a 67(-5) for the day and an overall -7 (137).

Over on the Golf Nazionale, the Englishman Jack Trewhitt signed a 68 (-4) with just one bogey today to put him in third place with -6 (138).

In joint fourth place, Paul McBride from Ireland on the Terre dei Consoli Golf Club and Javier Gallegos Marsal from Spain on the Golf Nazionale are both at -5 (139). The two players came in at 69 (-3) for the day.

Tied for sixth after their rounds on the Golf Nazionale, yesterdays leader, the Irishman, Simon Bryan, and Will Porter from Scotland sit at -4 (140). Three birdies and two bogeys for Bryan for a 71(-1) today, whilst the Scotsman had six birdies and a lone bogey for a 67 (-5), six shots better than yesterday.

The highest amateur on the leader board is the French player Paul Margolis, at -3 (141) in eighth position. He had another steady round today on the Golf Nazionale with two birdies and a bogey for a 71 (-1).

Also on the Golf Nazionale, a trio of players share ninth place at -2 (142). The two Dutchmen, Philip Bootsma and Koen Kouwenaar both shot a 69 (-3) who are joined by the Italian player, Giovanni Craviolo.

The cut came at +7 with 16 amateurs among the 73 players coming through. The Final Round tees off tomorrow from the 1st and 10th tees of the Golf Nazionale to decide who gets category 6 (top 35 and ties) or category 8 (from 36th to 73rd) on the Alps Tour next year.

Those players who did not make the cut will be eligible for membership in category 9 of the Alps Tour for the 2021 season.

The weather forecast looks to be smiling on the Final as sunny skies and light winds are forecast for tomorrow.