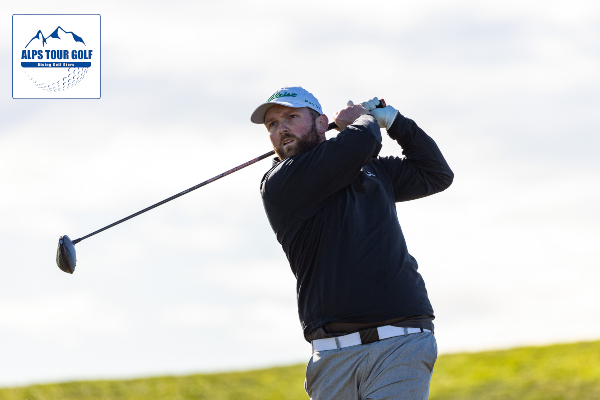 Qualifying School 2020 Final – Simon Bryan Leads After Round One

November 17th, 2020 – Rome, Italy – Blustery conditions made play difficult today but after the first eighteen holes, the Irishman, Simon Bryan is in the lead by one stroke from his nearest contender at -3 (69).

The 28-year old player from Druids Heath Golf Club in County Wicklow is not unfamiliar with such meteorological conditions:

“It was very windy; it was basically like being back at home but just with much warmer weather. So, keeping the ball’s flight down was pretty handy and with some of the greens being soft we could get at some of the flags, but you had to pay attention with being short sided. It was good, I kept ball in hand pretty much most of the day and when I was out of position on the greens, I just tried to put it close”.

Playing on the Terre dei Consoli course, Bryan teed off from the 1st making one bogey on each nine and a total of 5 birdies.  Having arrived early in Italy, he has got to know the course well:

“I’ve been here for three weeks. As soon we went into lockdown, I straightaway got onto the Alps Tour and then I got the General Manager’s email and we asked if we could come over and practice and they were more than happy to have us over. So I’ve been playing this golf course for three weeks solid. There were a couple of times today that I didn’t even look at the yardage book and just hit the shot. So, it was really nice to have that and it helped big time. We also got in a couple of practice rounds on the Golf Nazionale, so that’s tomorrow and I’m looking forward to it. I have a good game plan in place which is key on that course.”

There is a bit of a bottleneck in second position with seven players sitting at -2 (70). Three of them also played the Terre dei Consoli course; Javier Gallegos Marsal from Spain and two English players; Jack Trewhitt and Thomas Thurloway. The other four players were on the Golf Nazionale course today including the leader’s compatriot, Paul McBride. From the USA, we see Blaire McKeithen who briefly took the lead during the day and Will Heffernan from Australia, winner at Golf Club Parco de’ Medici in the First Qualifying round. The final slot is filled by the French amateur Paul Margolis.

In joint ninth place at -1 (71), is the top-ranked amateur present, Eduard Rousaud from Spain who had the only bogey-free round of the day.  He is joined by Alan De Bondt from Belgium, Alessandro Notaro from Italy and Victor Trehet from France.

Eagles were few and far between today, but the French amateur, Carl Bertrand, finished his round at the Golf Nazionale with one on the par 5 18th .  He is among the next group of five players at Par (72). The other eagle was from the Italian Guglielmo Bravetti who scored a hole-in-one on the par 3 9th. He is in the dozen players at +1 (73).

The players switch courses tomorrow for the second round at the end of which comes the cut to 65 players. The weather promises to be sunny and the wind should drop.