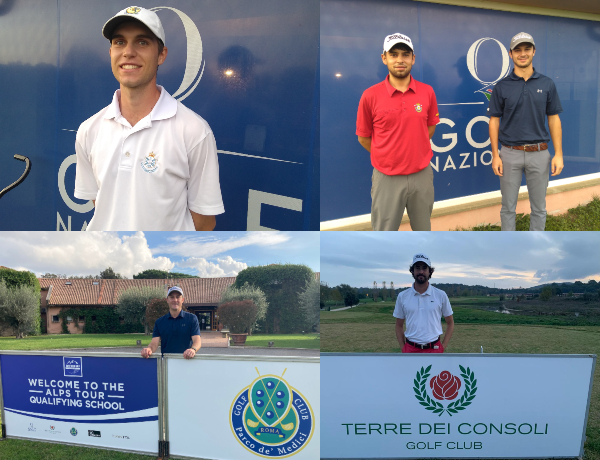 November 11th, 2020 – Rome, Italy –Despite play being delayed for two hours by fog at Terre dei Consoli Golf Club everyone finished before nightfall. All the rounds were concluded at the Golf Nazionale as well. However, on both courses there are six players tied at 33rd position meaning a play-off is necessary tomorrow to determine the official announcement of all the qualified players.

After the withdrawal of an exempt player from the Final Stage an extra slot was added to the Golf Club Parco de’ Medici number of places for a total of 14 for which the qualified players list is official.

The first winner of the day into the club house at -3 (141) was Will Heffernan after a round of 70 (-2). The sole Australian player at the QSchool, the Melbourne native explained his presence so far from home:

“I’ve been living in the UK for the past 3 months playing golf there since Australia’s in lockdown. I play on the Asian tour as well but they’re not up and running at the moment, so hopefully I can get some status on the Alps Tour”.

With four birdies and two bogeys, his game showed regularity over the 36 holes:

“My game was solid. I hit my driver really well, which obviously helps. The putter was a little bit cold today. I hit it a lot better than what the score suggests but I played pretty solid, hit the middle of most greens and made some nice up and downs”.

In second place at -1 (143) is yesterday’s leader, the Italian amateur, Alessandro Radig. After shooting 69 (-3) yesterday, two birdies and four bogeys saw him finish the day with a 74 (+2).

Coming in at Par (144) to take the third position is the Austrian player Robert Molnar. Despite a double bogey on the par four 4th hole, five birdies and a bogey saw him card a 70 (-2) for the day.

Of the fourteen places available for the Final Stage there are four amateurs and ten professionals qualified.

It was a three-player share of the first place at -2 (142). Alessandro Notaro from Italy, and the two Spanish  pros,  Sigot López and Roberto Garagorri. The Italian, who has previously played on the Alps Tour, carded a 69 (-3) today with five birdies and a double bogey. Lopez had two birdies and three bogeys for a 73 (+1) whilst his compatriot, Garagorri, had one of the best scores of the day on the course with a 68 (-4) after six birdies and two bogeys.

David Morago from Spain headed the leader board at -4 (140). A former Alps Tour player, he last played the circuit in 2017 and was happy with conditions here in Rome:

“The course was great, it’s long and wide so after three years of no competition it was perfect for my game. My game the last couple of days was great. I missed a lot of chances but in general it was really, really good and steady. So, I’m ready for the next stage”.

In third place with the best score on the course in the second round, is the Italian player Marco Archetti on -2 (142). Five birdies and a single bogey gave him a 68 (-4) today.

Six players will be competing in the play-off tomorrow for the remaining 4 spots.