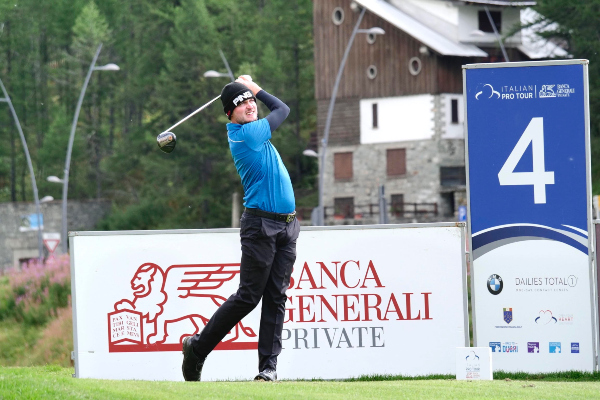 David Carey’s Irish eyes were definitely smiling as he entered the clubhouse with a record 57 on his score card after the first round of the 2019 Cervino Open. Photo credit:Bellicini/Italian Pro Tour
5th September 2019 | Alps Tour Golf

Breuil-Cervinia (Italy), September 5, 2019 – The mountain air obviously agreed with Irish player David Carey today as he carded 7 birdies going out and 4 birdies coming in on the Golf Club de Cervino course. With the rest of the card displaying pars and not a single bogey, his total was a sensational record round of 57 (-11) on the first day of the Cervino Open in the Italian Alps.

The previous Alps Tour record was 59 which had been achieved by three players, Jean Luc Bernier in 2007 (Sestriere International Open), Michael Bush in 2013 (Cervino Open) and Julien Clement in 2016 (Vigevano Open).

The Guinness World Record for the lowest 18-hole score is held by Australian golfer Rhein Gibson, who shot a 55 (-16) during a round at River Oaks Golf Club in Oklahoma in 2012.

The record-breaking Irishman admitted to having thoroughly enjoyed himself: David Carey: “I had a really good round. I didn’t do anything too wrong. I kept putting the ball close to the hole and kept making the putts. It was fun and in a spectacular setting”.

Obviously unperturbed by the effect of the thinner air on his shots at the 2500m altitude which he affirmed made the ball go further, he had used the practice round astutely: David Carey “I had lots of notes in my yardage book about how far everything went”.

Currently ranked 37th on the Order of Merit, the experienced Alps Tour player’s best result so far this season has been fifth place and so he will be looking for his first professional career win.

Four strokes behind in second position at -7 (61) is the Spanish rookie, Angel Hidalgo Portillo and the French player Anthony Renard. Both players turned in excellent scorecards showing 8 birdies and just 1 bogey each.

Hot on their heels is an Italian contingent who are not to be taken lightly. The three players at -5 (63) have all claimed 2019 tournament victories. Edoardo Lipparelli, winner of the Open de Saint Francois Region Guadeloupe and winner of yesterday’s Pro-Am Banca Generali Private competition. Alongside him is Enrico di Nitto, recent winner of the Nazionale Open in July and their compatriot Luca Cianchetti, winner of the Katameya Dunes Open. They currently stand at 2nd, 5th and 13th respectively on the OofM

Rounding off the top ten places at -4 (64) are the two Irish rookies, Simon Bryan and Peter Dallat alongwith the experienced players, Italian Alberto Campanile and Uli Weinhandl from Austria.

The Golf del Cervino, originally designed as a 9-hole course by David Harradine and later remodelled by Luigi Rota Caremoli into an 18-hole course, enjoyed pleasant weather today but mountain climatic conditions change rapidly and there is the possibility of thunderstorms tomorrow.