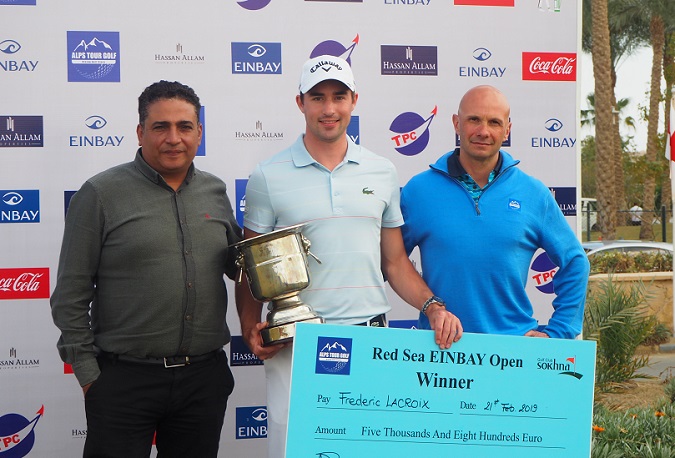 The first winner of the 2019 season corresponds exactly to the profile of the ideal Alps Tour player: Frederic Lacroix is a young, gifted golfer who decided to start his professional career building up some experience on our satellite tour, looking to soon progress to Challenge and European Tours.

On the pristine fairways of the Sokhna Golf Club B&C courses, in perfect weather conditions, Lacroix showed an uncommon coolness for a rookie playing – and leading from the start – his first tournament as a pro.

He passed from co-leading on the first day at minus 6, to be sole leader in the second round with -11 and finally winning with a total of -15, carding only 3 bogeys in 54 holes, 14 birdies and 2 eagles. Lacroix ended four strokes clear of young Spaniard Manuel Elvira, 22 – author of the best card of the final round, 65 (-7) – and Irishman Jonathan Yates, 25. On fourth place, three players were tied at -10 : Frenchman Teremoana Beaucousin, 24 ; Spaniard Sebastian Garcia Rodriguez, 29 ; and Italian Federico Maccario, 24.

« My goal was winning one of the tournaments of the Winter Series, and I worked for that ; and after the first round I told myself that it was possible, and I could have the chance right here. I never lost my confidence during the final round, although I did hit some really bad shot, especially on the back nine, but I was able to recover well ». This must have been possible also thanks to the preparation Lacroix went through during the last 3 years with coach Frank Lorenzo-Vera (brother of European Tour player Mike) for the game, but also the work done in the gym with a new trainer, and a positive attitude learned during the last year with a new mental coach: « all this seems to have given me the right tools that really worked well this week ».

Sokhna Golf Club will host also the second date of the Winter Series, the Red Sea Little Venice Open, starting next Monday 25th February on the A&B courses with the same prize money and same format : 120 players, 54 holes and cut after the second round for the top 40 pros and ties.

Results after 3rd round