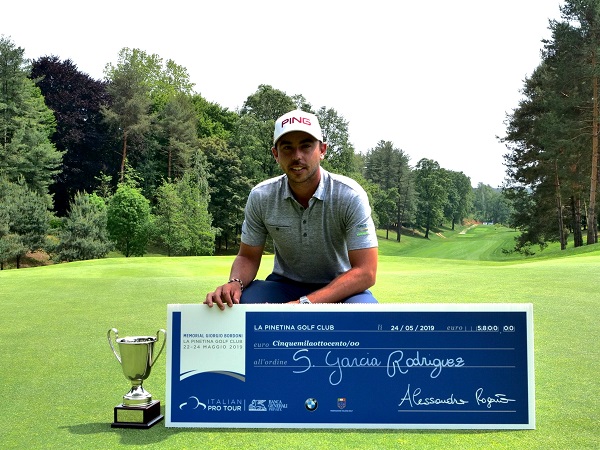 24 May, 2019 – Appiano Gentile (Ita) – It is in stressful moments that you can see if a player has the makings of a winner, and this is what Sebastian Garcia Rodriguez showed on his last hole at Golf Club La Pinetina, during the last round of Memorial Giorgio Bordoni when, with a 2-strokes margin and after sending out of bounds his tee shot, he immediately found back his composure and made a birdie with the second ball, thus finishing with a 64 (-6) today and an aggregate of 198 (68-66-64, -12).

Meanwhile, Italian Edoardo Lipparelli – leader of the first two days and for a good part of the last one – was playing a less sparkling round and his advantage was narrowing hole after hole following Garcia’s birdies. The Spaniard was playing a couple of holes in front of Lipparelli, having started the last round at -6 ; the overtaking happened at hole 13, with the second bogey of the day for Lipparelli and the 6th birdie for Garcia; Lipparelli’s birdie at hole 14th, followed by four pars, were not enough to catch experienced Garcia, leaving the Spaniard the chance to grab his second title of 2019 season only five weeks after winning the previous tournament in Italy, Abruzzo Open.

« I’m very proud of the good work I’ve done to come at this point » said Garcia, « I think that the Challenge Tour card for 2020 is now guaranteed ; still, I want to play the rest of the season wisely, trying to win the ranking. I’ve played very well the whole week, some stupid shots like everybody else, but all the part of my game were solid and consistent. I made less mistakes today compared to yesterday when I’ve made a lot of birdies, but also a lot of mistakes. It is so nice that I’ve won in Italy again! ».

« It’s been a beautiful day anyway » said Lipparelli, « playing in the team leader and trying to win, it was as a great experience and I’ve really enjoyed it. The course was playing difficult today, so congratulations to Garcia who signed a fantastic score with -6. I have no regrets, in the last holes I was fighting and having fun, this second place looks good to me and gives me a boost for preparing even better for next tournament in Guadeloupe ».

Garcia earns the cheque of 5,800 euros and further increases his leadership in the Order of Merit, where he now has 24,200 points and 22,450 euros after 9 tournaments ; Lipparelli climbs one position up to 2nd place, with 17,285 points and 15,528 euros. Best improvements of the week are for Englishman James Sharp – tied 4th at La Pinetina at -8 with compatriot Ben Wheeler and Dutch Lars Van Meijel – who climbs 11 places, to n. 22, and Argentinian Martin Contini, 7th with -7 here and 39th in the OoM (17 places up).

The tournament, in its 6th edition, is entitled to Giorgio Bordoni, highly respected coach of the Italian teams who died prematurely at 48, in 2013, and was promoted by Italian Pro Tour with the support of Banca Generali Private (Title Sponsor of Italian Pro Tour), BMW (Main Sponsor), Kappa, Leaseplan and Dailies Total 1 (Official Suppliers).