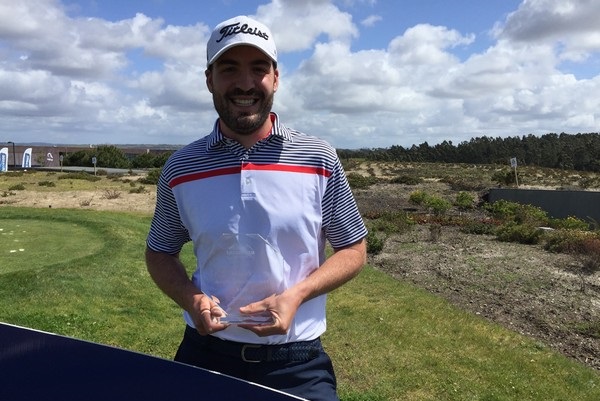 Spain’s David Borda won the Obidos International Open today at the Guardian Bom Sucesso Golf (Portugal) with a total of -5, one shot ahead of England’s Marcus Mohr.

It was Borda’s first professional win. It was also the first time in its history the Alps Tour held a tournament in Portugal, co-sanctioned by the Portugal pro Golf Tour.

«  I’m feeling great, it’s my first victory as a pro, I could not be happier » 31-year-old Borda said. «  It was a tough tournament. Yesterday, we played 18 holes in 12 hours, it was a long long day but it was well worth it » he explained.
Yesterday’s second round was disrupted by heavy rain showers that led to a 4h30 interruption. Last night, organisers announced the tournament would be played over 36 holes due to the lack of time to organise a final round.
«  I did not play today, I was waiting nervously for the results to come in despite the live scoring not working » Borda said. «  I had to wait until the last match to find out I had won » he said.
With today’s victory, David Borda now leads the Order of Merit, the Alps Tour official season ranking.
«  Last year, I finished 7th on the Alps Tour’s season ranking, I was 60 points short to enter the Challenge Tour so it was a tough moment. I kept working and finally, it paid off today » Borda concluded.
«  It feels nice » Marcus Mohr (ENG), who finished 2nd place overall (-4), said. « Playing all these years in Links golf in England paid off with all the wind and rain we had here » he added. « I feel confortable playing in waterproofs, the greens were really really quick out there. This is a great venue, the golf course is amazing » he concluded.
Portugal’s Joao Carlota turned in the best card of the day (-5) to finish tied for 3rd place overall. Frenchmen Guillaume Cambis and Julien Brun, Michele Ortolani (ITA) and Lars Van Meijel ‘NED) also finished tied for 3rd place.
Weather conditions were overcast most of the day with high winds and temperature in mid 10s.

Next tournament for the rising golf stars of the Alps Tour is the Gosser Open in Austria on May 24th.