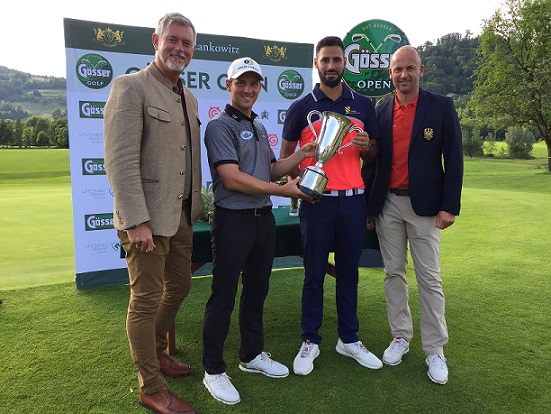 Spain’s Santiago Tarrio won the Gösser Open today at the GC Erzherzog Johann in Maria Lankowitz (Austria) with a total of -13.

It was Tarrio’s first win on the Alps Tour. The 2017 winner of the tournament Lukas Nemecz (AUT), Kevin Hesbois (BEL) and Louis Cohen Boyer (FRA) tied for 2nd place at -10.

«  I’m very tired but very happy, it’s my first victory on the Alps Tour after a second place last year » 27-year-old Tarrio said. «  I want to thank my sponsors, my family, my coach and all the people who are supporting me » he continued. «  I arrived at the Gösser Open after missing two cuts in a row on the Challenge Tour, so I did not have good feelings at first. But I love playing in this tournament as it feels like home here, it’s peaceful, it’s nice » he added. «  I’m not going to have time to think too much about this victory as I’m already preparing for the next Alps Tour tournament in Guadeloupe on Thursday » he concluded.
Yesterday, round 2 was stopped halfway through at the end of the afternoon after thunderstorms and rain showers made the course unplayable. Round 2 resumed this morning and 44 players made the cut and played the final round this afternoon.

« I’m happy, my week went pretty well. I did not know the course before and I struggled on the first day » Frenchman Louis Cohen Boyer who tied for 2nd place said. «  Yesterday, I did not know if I was going to make the cut. But this morning, I teed off very early, at 7.00 am, to complete the second round and then I started making birdies to make the cut » he continued. Cohen Boyer turned in the best card of the final round (-5) along with Lukas Nemecz (AUT) and Marcus Mohr (ENG).

«  I’m pretty happy about my game, I played well out there » Belgium’s Kevin Hesbois who also tied for 2nd place said. «  I made a few mistakes but I made 7 birdies and that made a difference in the end » Hesbois explained.
David Borda (ESP) still leads the Order of Merit, the Alps Tour official season ranking. He is followed by Jack Singh Brar (ENG) who did not travel to Austria this week and by today’s winner, Santiago Tarrio.
Today’s weather conditions were clear with afternoon clouds and temperatures in the mid 20s.

Rising golf stars of the Alps Tour are now heading to the French Caribbean Island of Guadeloupe for the Open de Saint François Region Guadeloupe, starting on May 31st.