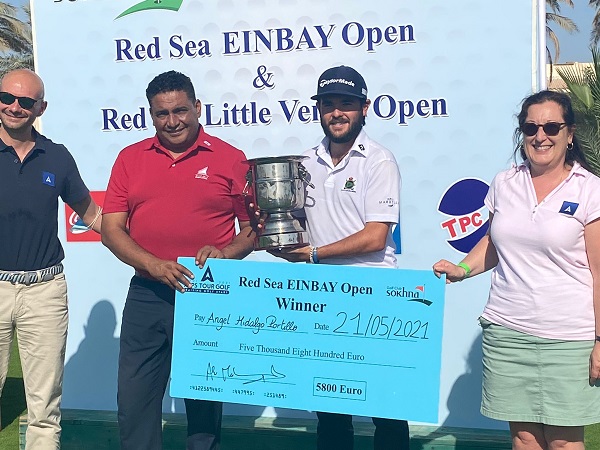 Angel Hidalgo’s moment finally arrived, although he had to fight for two extra holes against Frenchman Pierre Pineau before celebrating his first win on the Alps Tour and raise the 2021 Ein Bay Open trophy at Sokhna Golf Club. “I am very emotional right now as I have been chasing this win for a long time and I was really looking forward to demonstrating to myself in the first place that I was able to win an international tournament as a pro”, said the 23-year-old Spaniard from Malaga, who debuted on the Alps Tour in 2019 after winning the Qualifying School. “I started the day with a rather inconsistent game, in the front 9 I was missing all the fairways, but I was good recovering in the par 5’s where I had two birdies, and my caddie Nico Colomer was helping me a lot the whole round giving me confidence. Finally, I started driving straight from hole n. 11, and I hit good wedges to the greens, we made birdies on 11 and 12, then a stupid bogey on 14, a couple of good pars saved on 15 and 16, on 17 with Nico we decided to take the risk and attack, and it turned out well with an eagle that brought me to -5 for the day, -15 total. On the 18th I drove in the rough and had a bit of bad luck with the lie of the ball, I hit a flyer and unfortunately carded a bogey; then the two playoff holes went well – a par and a birdie – and I’m really happy about the outcome”.

On the first playoff on hole 18, both Hidalgo and Pineau missed their birdie putt, but on the second time, while Pineau found the rough from the tee, took a free drop and hit it over the green and went for a bogey, the Spaniard did not let his chance go and holed from about 3 metres for his final birdie.

“While on 2019, my first year on the Alps Tour, I played rather poorly, last year after making some technical changes I started having some results and although I did not win the Toscana Open last September – Matteo Manassero did – I demonstrated to myself that I was able to compete at a higher level, and I finished the season on 5th place in the Order of Merit. This year has started very well for me, with two 4th places in a row, and this week obviously I have been playing solid, too. The course is in great conditions, you need to adjust your putting a little because the grass is different over here, but I knew it as it is my third year, so it was no surprise. It was hot, no doubt, and that made things a bit more difficult for everybody, but you need to drink a lot of water – I think I’ve drank more water in these three days than in my entire life!!”.

“This win is for my grandfather, my inspiration” concluded Hidalgo, who is the new leader of the Order of Merit with 2.151 points more than Italian Jacopo Vecchi Fossa, now on 2nd spot. “I’ve been thinking about him all week and even wrote ‘abuelo’ on my ball, he definitely gave me the motivation to my success”.

The Alps Tour remains at Sokhna GC for the second leg of the Egypt Swing which is going to start in only 2 days with the Red Sea Little Venice Open (May 23-25).

For the final results of the Ein Bay Open click here