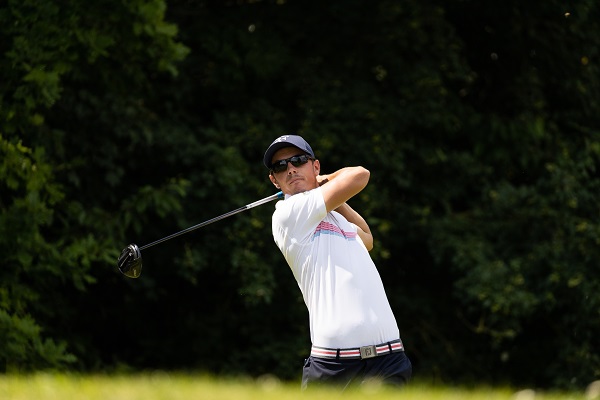 Swiss Ameil-Planchin is solo leader after 1st round

Metz, 11th June 2021 – As the turn of the 2021 Alps Tour season approaches, the 18th edition of the Open de la Mirabelle d’Or has started at Golf de la Grange aux Ormes, in Eastern France, producing some great show, as expected. After the first round, in fact, Swiss Arthur Ameil-Planchin, 27, is leading on 64 (-6) on the par 70, Philippe Gourdon designed course, with one eagle, five birdies and just one bogey for the day.

Italian Jacopo Vecchi Fossa, 26, leader of the Order of Merit after 6 tournaments, is pushing on the accelerator with a 65 (-5, with six birdies and one bogey) and shares the second position with four other players – compatriot Andrea Saracino, and Frenchmen Frank Medale, Romain Vallaeys and Dimitri Darnaud, who lost his leadership with a double bogey on the last hole. Vecchi Fossa will try to increase the gap with his pursuers in the ranking – he has now an advantage of 767 points on the second, Spaniard Angel Hidalgo Portillo, currently T38th at -1 (69) as well as Frenchman Pierre Pineau, third in the Order of Merit with 3,520 points less than the leader.

Ameil-Planchin started his round from hole n. 10 with fireworks: “I holed a nice putt for an eagle 3 at the first, followed by two birdies on 11th and 12th, then at the 13th I hit probably the only bad shot of the day, a 3-wood that ended in the deep rough but I reacted with a nice wedge and saved par. I’ve putted well overall, I managed to stick with the strategy I had worked out and everything went smoothly. My caddie Guillaume certainly helped to stay calm and focussed. The course is more challenging than last year in September, the rough is really high and thick, you really need to keep the ball in play”.

In spite of the high temperatures – a bright sun shone all day, with virtually no wind – and a punishing rough that made the fore-caddies work hard on many holes and the players hit many provisional balls whenever they would miss the fairway, the first round statistics record 54 players under par and a total of 21 eagles and 484 birdies overall.

Tomorrow the second round will start at 7:30, and at the end of the day the top 40 and ties plus amateurs within the cut line will proceed to play the final round and share the 45,000 points (and the 40,000 Euros for the pros).