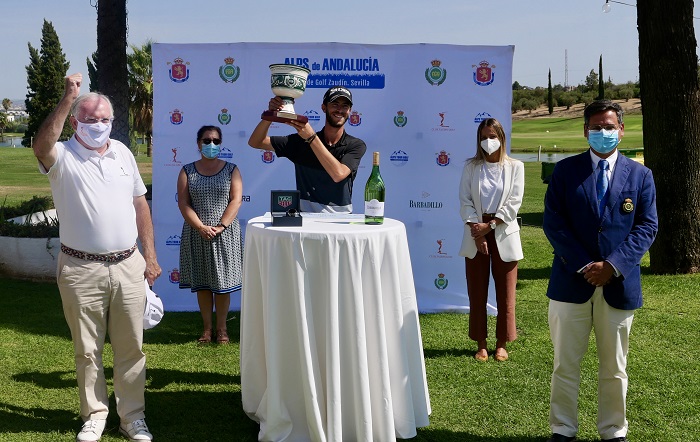 Vacarisas seals his first win on the Alps Tour

Tomares, Sevilla (Spain), 25th September 2020 – Lucas Vacarisas is the winner of the Alps de Andalucia at Club Zaudìn Golf in Sevilla with a total of 199 strokes (-14), one better than compatriots Jordi Garcia del Moral and Mario Galiano Aguilar who share the second spot at 200 (-13).

It is a dream come true for Vacarisas, 22, as he finally grabs the first title which had been so elusive in the last few weeks. The young Spaniard – one of the three Mena Tour players who got an invite to Alps Tour tournaments thanks to the agreement sealed by the two organizations last December – had a top-10 in Austria at Gosser Open last August, was 2nd in France at Open de la Mirabelle d’Or two weeks ago, and now – thanks to a solid final round in 64 – has climbed the Alps Tour Order of Merit up to the 2nd spot, behind the leader Garcia del Moral.

“I’m very happy, first of all for the job I’ve done and for today’s round”, said Vacarisas, “I knew I needed a good one in order to have a chance as anybody could win among the top ten. I’ve lost some focus between 10 and 12 with one bogey, but I reacted pretty soon. Of course I was a bit nervous waiting for the finish of Jordi and Mario, but I knew that the last three holes are very difficult on this course”.

In fact Garcia del Moral had been leading for most of the day while starting T3rd, as he sealed three birdies and one eagle in the front 9, and going as low as -16 on the 16th tee; then, two disastrous double bogeys (and one birdie on 17) broke his chance of winning for the second time in less than one month.

“This first win gives me a lot of confidence”, said Vacarisas, who wins a cheque for €5,800, “but for sure I will go on working more, this is just the start for me. There are two more tournaments in the Alps Tour season and I need to keep on scoring well in order to grab one of the three spots for the Challenge Tour”.

The best round of the day was 63 (-8), signed both by Spanish amateur Joel Moscatel and by Austrian pro Alex Kopp, who finished his round in style holing a 6-iron on hole 9 for a spectacular hole-in-one, and climbed up to 4th spot shared with Portuguese Tomàs Bessa.

Van Meijel, member of the last victorious Palmer Cup, was in contention last week during the first event of the season. This experience can help him to improve his 4th recorded last week.

« It was really cold this morning but I started really well, I was 4 under through 6 holes. So I thought it would be a pretty low round. Afterward I did not hit that many good shots but that was good enough and the par 5 I birdied.
Tomorrow I am just gonna go play the same I have the last 5 rounds and we will see. It is fun here because there are a lot of players I played with as an amateur and there 3 Dutch guys so it doesn’t really change now that I am professional »

Vacarisas, 18, holed 6 birdies during his round but had some trouble on a couple of holes. He admitted he could feel the pressure of being on top of the leaderboard.

« My day was good but I was a bit nervous at the beginning of the round. But I tried to stay calm and be patient and after 4 holes I started to play my game. I hope I will be able to play the same tomorrow and to hole the putts same as today. There is one round left and if I manage to play my game I have a chance to win. »

Spain’s Gerard Piris and Lucas Vacarisas took a two shot advantage after opening round 66, -6 at Red Sea Little Venice Open. A French duet is on their toes, Robin Roussel and Thomas Perrot signed for 68.

Weeks hopefully are not the same in Egypt. The nice weather came back on the banks of the Red sea, finally and the field enjoyed great playing conditions in Sokhna Golf Club.

Last week was all about Frenchmen, this week started with a Spanish demonstration. Both Piris and Vacarisas shot flawless 66 in the afternoon after best score of the morning sessions was -3 for a pack of players.

Piris admitted that even if he played really nice, he got some lucky results.

« Of course, when you shoot 6 under, you are very happy. I played very well and in this kind of day, you got lucky as well. I did not have any momentum but I played well during all round. I put the ball in play, I hit it close to the pins and I holed some putts.

I think this composite A&B is a little more difficult than B&C played last week. The leader was -8 and the wind has changed. »

One of the youngest player on Alps Tour, Lucas Vacarisas, 18, is sharing the lead with his elder.

« At first, I did not play that well but my putting was ok. Then my game was more and more consistent and I manage to play my game with thinking about the results. Honestly, It makes no difference that we already played 9 holes last week. My game was good during back nine and front nine. »

The projected cut -1 after one round. Last week winner, Julien Brun, had a shy day with level par and Maxime Radureau holed the second albatross since the Alps Tour arrived in Egypt. After Leo Lespinasse last week, Radureau holed a 2 iron shot on the 8th to signed for 69.