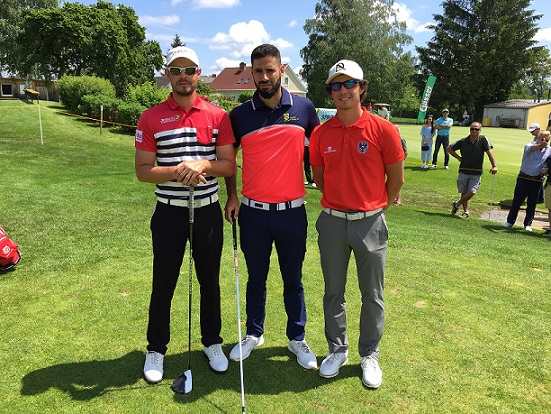 Round 2 of the Gösser Open was completed this morning and 44 players made the cut set at -2.

Yesterday, round 2 was stopped halfway through at the end of the afternoon after thunderstorms and rain showers made the course unplayable.
Santiago Tarrio (ESP) and amateur Niklas Regner (AUT) are co-leaders at -9. They’re followed by Jurgen Maurer (AUT), Markus Brier (AUT), Jordi Garcia Del Moral (ESP) and Teremoana Beaucousin (FRA) at -7.
«  My long game was very good, my putting was excellent » Austria’s Nikals Regner, who quit his skiing career after a national title in his age category to turn full-time to golfing, said after completing round 2. « I don’t mind playing two rounds in a day, it’s the same routine, I’m really forward to the final round » he added.
The Austrian delegation is bringing 12 players into the final round, including 3 amateurs.
Weather conditions have improved compared to the last couple of days. Sky is partly cloudy this afternoon and temperatures are in the mid-20s.
A shotgun start launched the final round of the Gösser Open at 12h40 local time.
Latest Alps Tour Golf News