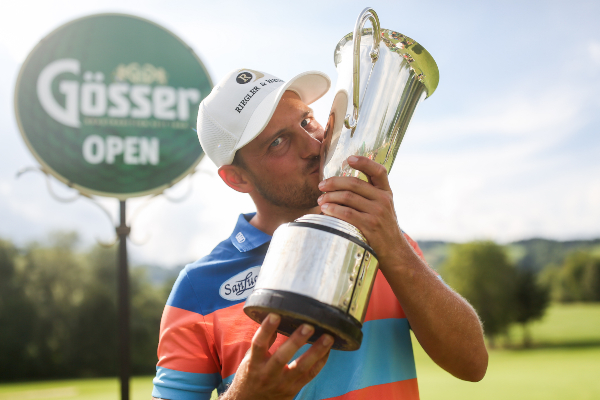 Maria Lankowitz (Austria), August 15, 2020 – What a great way to celebrate the return of the Alps Tour 2020 season with a nail-biting finish here at the Gösser Open which saw Lukas Nemecz from Austria, winner of the tournament in 2017, grab the title on the last hole with a -17 (199) for the 54 holes.

The final round teed off at 11:15am. Possible inclement weather later in the afternoon imposed a shotgun start at the Erzherzog Johann Golf Club to ensure that the round could be completed.

Round 2 had finished at 10:45am with Jordi Garcia Del Moral from Spain topping the leader board at 130 (-14) and in joint second place at 132 (-12) the Frenchman Thomas Elissalde and two Austrian players, Alexander Kopp and the amateur Maximilian Lechner. Yesterday’s number two, Angel Hidalgo Portillo from Spain, started in fifth position at 133 (-11) alongside the Italian Jacopo Vecchi Fossa and Lukas Nemecz from Austria.

Everything looked to be plain sailing as Jordi Garcia Del Moral started the back nine at -17 overall. However, Sebastien Gandon from France suddenly burst into contention.  He had started from the 8th tee at -8 and opened with 5 straight pars. He then went into a birdie frenzy of 8 in a row which saw him steam up the leader board to second position on hole thirteen.

This left him just three strokes behind the leader. Jordi then bogeyed the 15th to leave just two strokes between them and three holes to go. Sebastien finished with pars to come into the clubhouse with an amazing -8 (64) for the day and 200 (-16) for the tournament.

Jordi was still out on the course with two holes to play and…he bogeyed the last two placing him and Sebastien in line for a play-off with both sitting at 200 (-16).

But Thomas Elissalde, winner of the Gösser Open in 2014, who started at -12 from the first tee alongside Jordi, had three birdies on the front nine interrupted by a double bogey to see him on the 10th for -14. He kept his cool on the last nine holes and another two birdies saw a three-way play-off lined up.

And still more surprises, as the Austrian player Alexander Kopp at -15 on the 17th birdied the last hole to also finish with 200 (-16). A four-way play-off?

All eyes were now riveted on Lukas Nemecz, who had teed off from the third at -11. Following three birdies he was at -15 with two holes to play. Two magnificent birdies saw him winning his second Gösser Open trophy and third Alps Tour win after the 2019 Dreamland Pyramids Open.

Lukas had not realised that he was putting for his second Gösser victory on the 18th green:

“I thought Jordi was still at -18 and didn’t know that he had bogeyed the last two holes. I knew the last putt was important, but I didn’t know it was for the win. I couldn’t believe it when people said that it was the winner.”

He also talked about at being back playing professional golf and the Covid restrictions:

“It’s great that we can play golf and that the Alps Tour and the promotor did everything possible so that we could play. It’s important to play every opportunity that we have. It’s a little different with the Covid situation and we’ve had to make little adaptations but that make sense and are very important. At the end of the day it’s a 54-hole tournament and every hole counts. It was great playing but I’m happy it’s over!”.

One of the adaptations for the tournament is the innovation by the Alps Tour of the introduction of a mobile phone live scoring application, replacing paper score cards and thus reducing contact points. Developed by OCS Sport, led by MD Lee Probert, the players reacted very positively to it. As the winner, Lukas Nemecz said:

“I think it’s great. It’s modern, easy to use, a real live scoring. We’re living in a digital world, so I think it’s really good”.

The new application will become standard for future tournaments and the next Alps Tour 2020 tournament is the Cervino Alps Open at the Cervino Golf Club in Italy from 2nd to 4th September 2020. A presto!