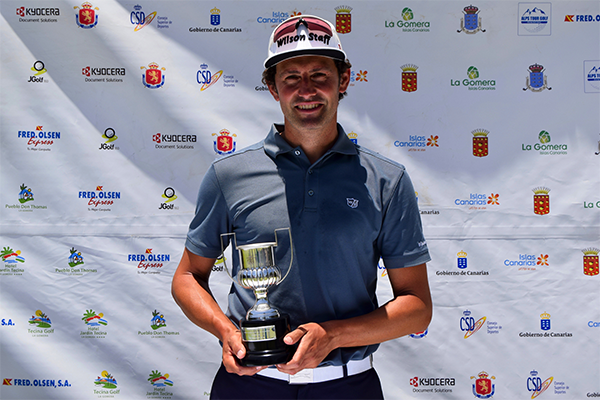 Alfredo García-Heredia (ESP) won today the Fred Olsen Alps de La Gomera at the Tecina Golf with a total score of -18. The 36-year-old player from Spain’s Asturias region had been leading the tournament since the first round.

He is followed by a pair of Frenchmen, Louis Cohen Boyer and Léonard Bem, who both finished 2 strokes behind at -16 total. Bem turned in the best card of the day at -8 with an eagle and 6 birdies. Cohen Boyer started his final round with four consecutive birdies. But the French player’s back 9 was far quieter with no birdies and a bogey.
«  I did not play badly in the first holes but suddenly I see myself three behind » García-Heredia explained. The spaniard made 7 birdies and 2 bogeys total in the final round. «  But golf is very long game and there were still interesting holes to come, I knew I was going to have my options at the end » he continued. «  Winning is always a pleasant feeling, I will try to reproduce in the upcoming tournaments what I have felt here on the course, even when I did not play so well,” García-Heredia said. “I will go with my wife to dinner to celebrate this evening and then travel to Jerez tomorrow. I will go fishing after the Alps of Las Castillas in León next week » he concluded.
” Today was really different from the other times when I was in a position to win” Louis Cohen Boyer said. ” I played the way I wanted to play to try to win the tournament. Alfredo García-Heredia did what he had to do to win today and I wish to congratulate him for his last 9 holes” he concluded.
« I’m very happy with my week! » Frenchman Léonard Bem said. «  The start of the season was difficult for me but I’ve been feeling better in all compartments of my game for a few weeks now. And this week, I particularly felt well. The course is very nice and in good shape. The location is just beautiful with a magnificent view » Bem continued. « This is all very positive on top ot turning in the best card today » he concluded.
Santiago Tarrio (ESP) still leads the Order of Merit, the Alps Tour official season ranking. Louis Cohen Boyer moves up to 2nd place after his result today. Alexandre Daydou (FRA), Marcus Mohr (ENG) and David Borda (ESP) complete the top 5 of the ranking. At the end of the season, the top 5 of the Order of Merit qualifies directly to play on the Challenge Tour.

Rising golf stars of the Alps Tour will now travel back to Spain’s mainland for the Alps de Las Castillas in León July 18th through July 20th. 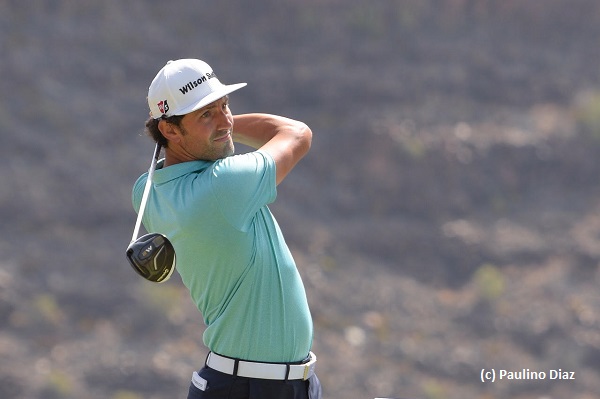 Alfredo Garcia-Heredia (ESP) is the sole leader of the Fred Olsen Alps de La Gomera after round 1 with a total score of -7.

He is followed by Shaun Jones (NZL) and Leonard Bem (FRA) who are one stroke behind at -6 total.
«  It was very nice to start with 6 under on the front 9. I played really good, I made some good putts, I did not hit very good shots from holes 10th to 15th. I had good chances for birdies on holes 16th, 17th and 18th, I could make the last one so it was a good finish » Garcia-Heredia said. « I’m so happy to shoot 7 under, no bogeys, bogey-free, it’s always good to start like that » the 36-year-old player from Spain’s Asturias region concluded.
Garcia-Heredia made an eagle and 5 birdies.
Weather conditions were sunny with light wind and temperatures in the low 20s.
Round 2 will tee off tomorrow at 8h30 local time.

The second half of the Alps Tour season is well underway and rising golf stars are heading this week to the small island of La Gomera, one of Spain’s Canary Islands, for the Fred Olsen Alps de La Gomera July 12th through July 14th.

It is the first time the Alps Tour makes a stop in La Gomera and its 378 square kilometers area. The island has been declared a World Heritage site by UNESCO due to its ecological treasure with its rich vegetation and species rarely found anywhere else on the planet. The magnificent peak Garajonay, culminating at 1.487 meters above sea level, looks at the Atlantic Ocean in a sequence of mountains and canyons that form almost perfect circles.

The tournament is played at the Tecina Golf La Gomera, a 18-hole par 71 golf course designed by renowned golf course architect Donald Steel. The course has the particularity of being built on top of a cliff in a succession of terraces down the mountain overlooking the Atlantic.

75 players have entered the 3-day tournament.
The €40,000 prize money tournament is played over 54 holes of traditional stroke. Following a cut after 36 holes, the top 40 and ties will qualify for the final round of the tournament.
Latest Alps Tour Golf News