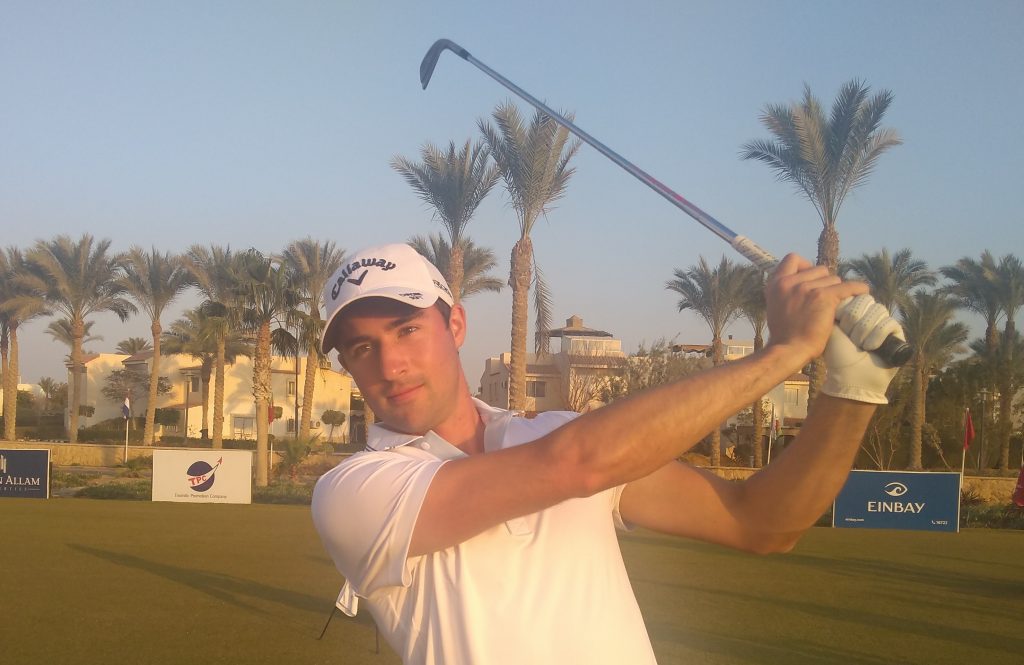 Rookie Lacroix pulling ahead in Egypt

It is his first tournament as a professional, and he’s leading by one shot after the second round of the Ein Bay Open on Sokhna Golf Club, in Egypt, but Frederic Lacroix, 23, is still not completely satisfied with his game: after returning his card (a 67, which follows yesterday’s 66) late in the afternoon, he heads to the practice ground to refine some details.

With a total of minus 11, Lacroix is followed very closely by his French colleague Teremoana Beaucousin (66-68), 24, who was co-leader after the first round; in third place stands a duo of Italian players, Lorenzo Scalise, 23 – also a rookie among pros, like Lacroix – and Alessandro Grammatica, 29, author of the best round of the day, 65 (-7) – same score posted by Swiss Mathias Eggenberger, 27.

« I would like to work a little bit on my wedges and irons, just to keep in touch with the good sensations and be ready for tomorrow », said Lacroix, who represents the Racing Club La Boulie of Versailles, in France. « Today my game was not as smooth as yesterday, I’ve started with a birdie at 10th, but then I had some tough moments and a stupid bogey on 14th. I had a good reaction though, with three birdies in a row on holes 17, 18 and 1, and two more birdies on the two par 5s, holes 3 and 7. Tomorrow I need to do the same thing and try to go low, if I want to win; all the other competitors behind me have the same goal as me! ».

Results after 2nd round 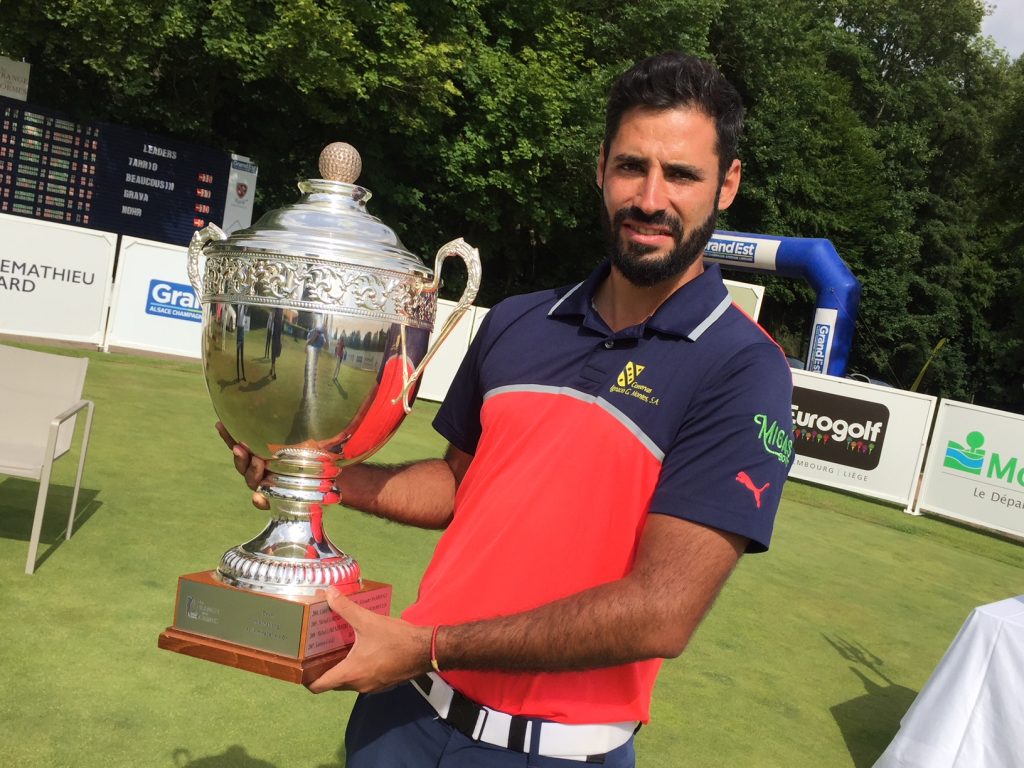 It is Tarrio’s second victory on the Alps Tour this season. He won the Gösser Open in Austria in May.
Teremoana Beaucousin (FRA) finished 2nd overall 5 strokes behind Tarrio (-11 total). Thomas Grava (FRA) grabbed the 3rd spot on the podium at -10 total.
«  I’m very happy, I started playing today just like in the past few days, it went all well from the very beginning. It was an easy day, I made some good shots, I reached greens and made some good putts, golf is fun when played like this » Santiago Tarrio said
«  I felt comfortable, I did not feel nervous at any moment. I did not make any bad shots, I was putting myself in a situation where I could make birdies on quite a few holes and when you have these sensations, it is always easier when walking the final round of a tournament » he continued.
«  The goal at the beginning of the season was to be in the top 5 of the order of merit, I’m now in the leading spot, I’m just following my path. This is my second victory on the Alps Tour, a 3rd one would take me directly up on the Challenge Tour » Tarrio added.
«  I’d like to dedicate this victory to my sponsors. Without their help, I would not be here. These sponsors are Migas Boiro, Conservas G. Montes and Bigoutlet for the gear. I’d like to thank also my family, my father who is also my coach and my girlfriend » he concluded.
«  I’m very happy especially since I finished the day by making a birdie on hole 17 to finish the tournament alone at the 2nd place » Frenchman Teremoana Beaucousin said. «   I had a difficult time at the beginning of the day but I was able to hang on and continue play my game with the same tactic in place during the first 3 days.  I’m very satisfied with this great week » he continued.  «  I was very happy to have my dad by my side this week. He lives in Tahiti and I don’t see him very often » he concluded.
«  I felt great from beginning to end, from the first round to the final round. Even today, I was able to manage the pressure of a final round. I sticked to my game plan which was rather agressive. I enjoyed the whole week » third place finisher Thomas Grava said.
Weather conditions were sunny most of the day with some clouds and temperatures in the 20s.

Rising golf stars of the Alps Tour will now travel to Italy for the Open La Pinetina starting on June 27th. 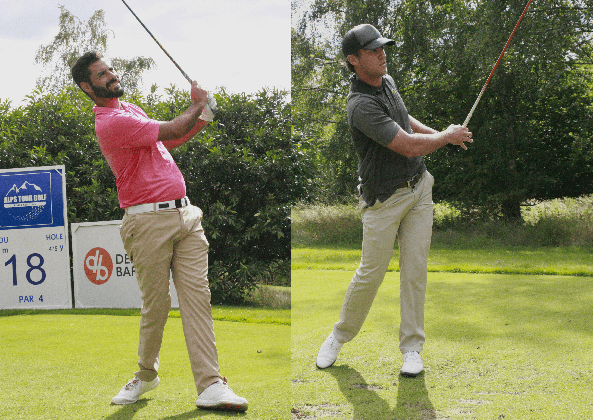 They’re followed by James Sharp (ENG) who is 2 strokes behind at -8 total. Thomas Grava (FRA) is in 4th place at -7 total while Leonardo Sbarigia (ITA) and amateur Felix Mory (FRA) are tied for 5th place at -6 total. Mory turned in the best card of the day at 65 (-6).
«  I played pretty good, I was 2 under until hole 12. Then, I bogeyed hole 13 and 18 to finish but I’m pretty happy with a level par today » Beaucousin said. «  The greens were very firm and it was very windy so it was hard to get the ball close to the hole. I did not make many birdies today but I think it was the same for everybody » he continued. «  Tomorrow, I’m going to try to do my best, stick to the plan and do the same thing as I’ve been doing in the last 3 days » Beaucousin concluded.
«  I think it was a difficult day for everyone because the course was very hard, the greens were very hard, and it was difficult to get the ball close to the pin » Tarrio said. «  Personally, I had a day similar to yesterday. I started playing well the first 9 holes and then the last 9 holes, my swing was no longer that fluid. I think doing level par today is good, we’re still at the top of the leaderboard and tomorrow is another day » he continued.
«  I played well, my putting was very good, I made a few putts between 2,5 meters and 5 meters » 23-year-old French amateur Felix Mory said. «  It was a rather easy day for me except on hole 18 where I made bogey. That’s too bad. Tomorrow, I’ll play relaxed, I’ll let the birdies come in, I’ll try to make pars and we’ll see what happens » Mory said. Mory obtained an invitation to play the Open de la Mirabelle d’Or, his first Alps Tour tournament. He will play the European Amateur Championship next week in The Netherlands.
Weather conditions were sunny most of the day with some clouds and temperatures in the 20s.
Final round will tee off tomorrow at 7h local time. 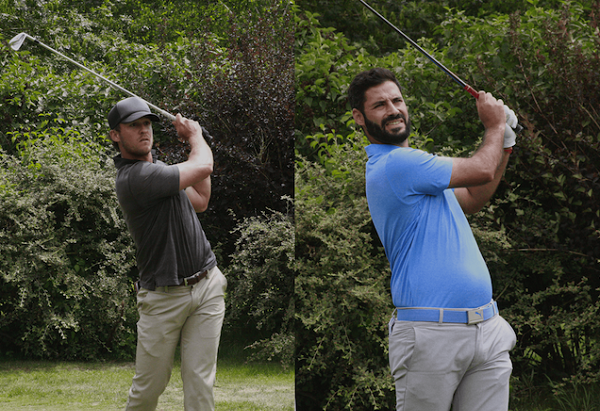 Santiago Tarrio (ESP) and Teremoana Beaucousin (FRA) are co-leaders of the Open International de la Mirabelle d’Or after round 2 with a total score of -10.

They’re followed by James Sharp (ENG) who is 2 strokes behind at -8 total. Sharp turned in the best card of the day at 65 (-6).
«  I started very well, I played very well at the beginning » co-leader Santiago Tarrio said. «  I started with 3 birdies in a row and then I missed the next 3, all very close » he explained. «  After 9 holes, my level of golf went down a bit. I shot some bogeys, a round at -3 is never a bad score. For tomorrow, I hope to have the same sensations I had during the first 9 holes today and play stroke after stroke as best as possible » he continued.
«  I had a pretty rough start. I was 2 over after 11 holes. I was playing pretty good but I was making some mistakes » co-leader Teremoana Beaucousin explained. «  I made a good birdie on hole 12, a par 5. And then I birdied 13, 14, 15 and 17 hitting inside 2 meters and a good shot on the 18th for another birdie » he continued. «  I’m happy, I just did not play the way I wanted the first 12 holes but then I hit some pretty good iron shots on the back so I was pretty happy about that » he said.
Beaucousin shot a total of 7 birdies and 3 bogeys while Tarrio had 6 birdies and 3 bogeys.
«  I tend to play well here » James Sharp said. «  I finished 3rd here my first year on the Alps Tour 3 years ago so it’s nice to come back to a place where obviously I played well before and to get within 2 of the leaders is nice » he said. «  But there are still 36 holes to go and therefore, still a long way to go » he concluded.
58 players made the cut set at +2 and will play the next two days at the  Domaine de la Grange aux Ormes. The final round is scheduled for Sunday.
Weather conditions were cloudy all day with sunshines on and off and temperatures in the low 20s. 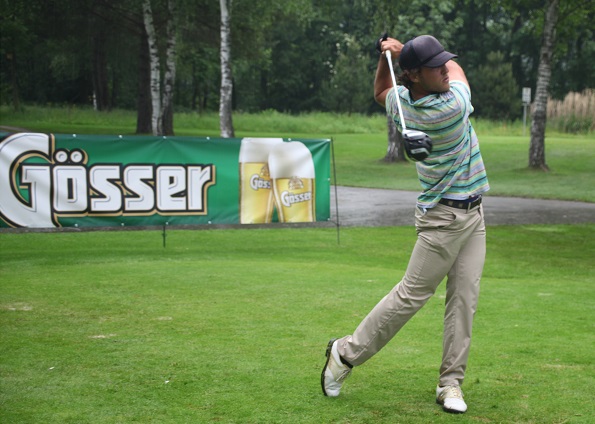 Round 1 of the Gösser Open saw Teremoana Beaucousin (FRA) take the lead of the tournament at -7, 2 shots ahead of a group of 5 players, at the GC Erzherzog Johann in Maria Lankowitz, Austria.
«  I started with 2 birdies on the first 2 holes, then I made par up to hole 7 where I made another birdie, I made a birdie on 12 and an eagle on 13 to finish with a final birdie on 16 » Beaucousin explained.
«  I feel good, I’ve been playing better in the last couple of months, I got some good practice in Morocco this winter and I’m ready » he added.
The 143 rising golf stars enrolled in the tournament faced difficult weather conditions with rain showers hitting the course throughout most of the day.
«  It was very rainy » Beaucousin said. «  The pins were not that easy and there was a lot of spin on the ball so it was kind of hard to keep the ball near the hole » he added.
Beaucousin, 23, is from Tahiti, French Polynesia. He arrived in mainland France 8 months ago after spending 4 years on a scholarship studying and playing golf at Kennesaw State near Atlanta, Georgia (USA). The Gösser Open is his second tournament of the Alps Tour.
This year marks the 26th edition of the Gösser Open, the oldest tournament on the Alps Tour circuit.
The Gösser Open continues tomorrow with round 2. First tee time is at 7h30 local time.
Latest Alps Tour Golf News