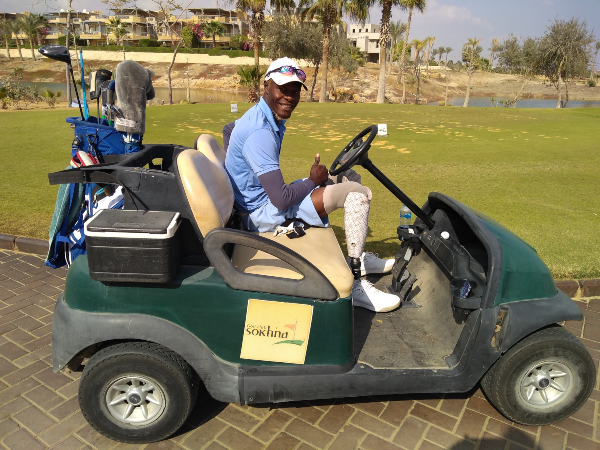 The Iron Will of Issa Nlareb Amang

In February 2018, during the Ein Bay Open, the player from Cameroun, Issa Nlareb Amang fell ill with bacterial meningitis; a life-threatening disease, with a 50% mortality rate. He fell into a coma, went into septic shock and was rushed to hospital in Suez, where the doctors managed to save his life. However, the treatment for the septicaemia led to complications and the life-altering, partial amputation of some of his extremities.

Now, just two years later, with prosthetics in place, the 29-year-old player, father of three, is back at the Sokhna Golf Club :

“It was obviously difficult for me to come back here, but I’ve done it. I feel like I’ve been reborn in a way. I’ve been out practicing on the course today and began to feel a little of the old sensations, the old ‘good’ sensations of the golfer I used to be.”

For, prior to succumbing to the virus, Issa Nlareb Amang was a rising star of African golf. Champion of the Senegal Open in January 2018, the only Cameroonian and the first African player to gain entry to the Alps Tour, his talent and passion for the game promised a golden future.

Despite all the ordeals he has been through, Issa shows an unbounded amount of positivity:

“I’m proud, proud to be here. I surpassed myself on the course today. I feel even stronger now having come back here to Egypt. I had the impression out there that I haven’t lost much, even if my appearance isn’t always easy to live with and it brings tears to my eyes that I’ve lost two years.”

Even so, he maintains a relentless good humour extending even to his self-given nickname, ‘Bioman’, a Japanese TV series character half robot/half human.

And the biggest motivator of all? His love of golf.:

“Even when I came out of the coma and couldn’t talk, I never stopped playing golf in my head. Even lying in the hospital bed, I was constantly thinking about the little white ball. I think it is what kept me alive and what has given me the strength of will to play again today.”

His presence this year at the Ein Bay Open is a true testament to his extraordinary courage but as he explains: