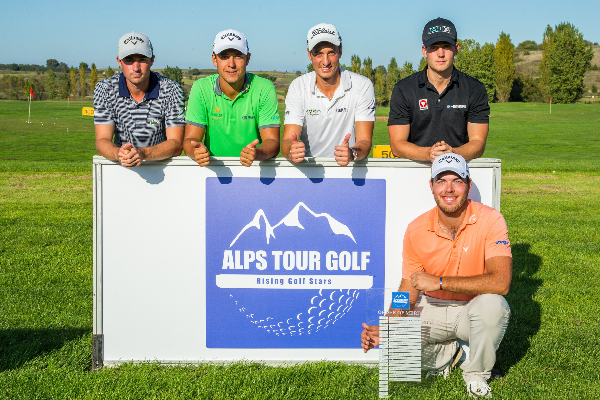 The Victors of the Alps Tour Order of Merit 2019

After a closely fought Grand Final in Italy on the Terre dei Consoli and Golf Nazionale courses, the top five Alps Tour players on the Order of Merit 2019 earned a place on the Challenge Tour for the 2020 season.

In first place was the Italian player, Edoardo Lipparelli. A rookie on the tour, he played 15 of the 17 tournaments this season, achieving 8 top ten tournaments finishes including winning the Open de Saint Francois Region Guadeloupe in June. Consistency of play would maybe be the keyword to his game with only two tournament finishes over par and a stroke average of 68.87.

His compatriot, the rookie Enrico di Nitto came in second on the OofM. The highlight of his season was winning the Nazionale Open in July. This coupled with 9 top ten finishes over 15 tournaments and a stroke average of 69.24 underlines his determination on the tour.

Frédéric Lacroix from France holds a well-deserved third place after winning three tournaments in his rookie year; the Ein Bay Open in February that opened the 2019 season, the Alps de Las Castillas in May and the Saint-Malo Golf Mixed Open in July. This third victory after 13 tournaments gave Frédéric a place on the Challenge Tour for the remaining 2019 season. His sixth-place finish at the Grand Final and extremely focussed play throughout the season allows him to continue on the Challenge Tour in 2020.

Federico Maccario’s win last week at the Grand Final on his home turf of Italy, secured him fourth place on the OofM. Disappointed by having been a strong contender but having finally lost some of the 17 tournaments he competed in this season, his patience and commitment paid off with an incredibly solid game to give him his rookie victory.

The only non-rookie in the top five, the Austrian player, Timon Baltl’s perseverance finally paid off in this, his third season on the Alps Tour.He savoured his first tournament win on home turf at the Gosser Open in May of this year which contributed to his season-end ticket to the Challenge Tour.

Five rising stars in the world of golf who now move on to the next chapter in their professional careers. A career started on the Alps Tour which has proven to be a successful springboard for launching aspiring, young golfers on the professional European circuit.

Just this weekend at the WGC-HSBC Champions in Shanghai, Victor Perez came in joint fourth. This follows on from his victory at the prestigious Dunhill Links Championship in September of this year. The French player made his début on the Alps Tour in 2016 where his OofM third place saw him move on to the Challenge Tour in 2017 and at the end of 2018, earn a place on the European Tour.

He is now the highest ranked French golfer at N°57 of the Official World Golf Ranking and rises to number 13 in the Race to Dubai.

Another recent notable former Alps Tour player is Matt Wallace from England who after winning six tournaments on the Alps Tour and the OofM in 2016, moved on to the Challenge Tour in 2017. His performance including winning the Open de Portugal, a dual-ranking event with the main tour, gave him promotion to the European Tour. His 2018 season saw him win three events; the Hero Indian Open, the BMW International Open and Made in Denmark. With a share of fifth at the Nedbank Golf Challenge and tying for second at the season-ending DP World Tour Championship he moved into the top 50 of the OWGR. 2019 has seen him continue to progress with a notable joint third at the PGA Championship Major. He is currently 28th on the OWGR and 6th in the Race to Dubai.

Winner of the Portugal Open in October 2019, the English player, Steven Brown, started out on the Alps Tour in 2012, went on to win the OoM in 2014 and moved to the Challenge Tour where he played until 2017. He had a successful season with seven top-ten finishes to finish 12th on the OoM and earn a place on the European Tour for 2018 which he finished at 97th on the OoM. A disappointing start to the 2019 season has been compensated by his recent victory plus an 11th place at the Amundi Open de France.

Two more French players also continue to make their mark. Antoine Rozner gained notoriety in 2019 when he won two back-to-back Challenge Tour events at the start of the season; the Challenge de España and the Prague Golf Challenge the very next week. He started on the Alps Tour in 2017 before his third place on the OofM saw him move on to the Challenge Tour in 2018 . Robin Roussel was on the Alps Tour for the same season as his compatriot where he finished fifth on the OofM.  He has had six top 10 finishes this season on the Challenge Tour including victory at the Hauts de France – Pas de Calais Golf Open. They are currently fourth and fifth on the OoM with a European Tour card beckoning.

Other former Alps Tour players can be cited but let’s leave the last word to Frédéric Lacroix, one of this year’s top five OoM when recently interviewed and asked what he thought of the Alps Tour: “It’s underrated. It looks easy from the outside but in the end it’s not. There are good players and you have to play solid to get on top.”

The Iron Will of Issa Nlareb Amang 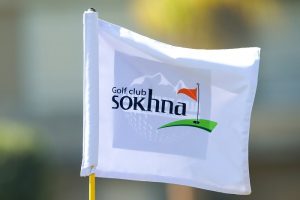 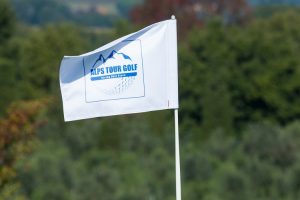 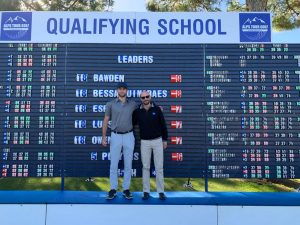 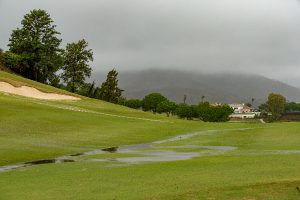