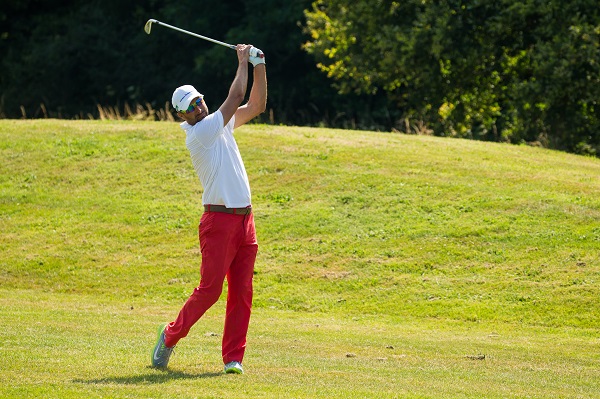 The Austrian player, Uli Weinhandl, jumps to the top of the leader board on Day 2 of the Nazionale Open. Photo credit Tristan Jones
26th July 2019 | Alps Tour Golf

Uli Weinhandl Soars Into The Lead

July 26th, 2019 – Rome, Italy – In a closely fought, exciting second day at the Golf Nazionale, the experienced Alps Tour player, Uli Weinhandl from Austria, soared up the leader board of the Nazionale Open to take first place with a magnificent -8 (64) for the day.

It was truly the performance of the day as Weinhandl carded 8 birdies and not a single bogey. His combination of aggressive and defensive play certainly paid off. And the key to his game today?

Uli : “I played really well. Everything is good when you shoot a 64 on such a tough course. I played solid from tee to green and my short game was really sharp. I chipped like I had total control and my putting was good. That was the key to my round.”

Weinhandl was not unduly affected by the high temperatures and just made a couple of adjustments in his choice of clubs compared to yesterday because the wind had picked up today. He was also enthusiastic about the Golf Nazionale course:

Uli: “It’s a great course. In terms of design, it’s probably the best course we’ve played this year. You can’t relax on any of the holes. You have to hit good shots off the tee and into the greens. If you miss a shot, most of the time you lose the ball. If you’re a little off, you can shoot high numbers.”

In second place at a -7 (137) for the two first rounds, Teremoana Beaucousin from France entered the clubhouse in the lead but was nudged off the podium by Weinhadl who was playing four flights behind him. With a bogey and two birdies on the front and back nine, Beaucousin carded a -2 (70) for the day.  Not as strong a performance as yesterday where he scored -5 (67) but more than enough to keep him in contention.

Teremoana: “There was a lot of wind today, the greens were really firm and it was very hot, so it was difficult to put the ball near to the pin. This course requires care on the tee-off with some difficult angles and a lot of rough waiting for stray shots. I’m happy with my round today and will continue with the same strategy tomorrow, that is not taking too many risks and avoiding bogeys a much as possible.”

Yesterday’s leader, Enrico Di Nitto from Italy, dropped back to third place with a +1 (73) for the day leaving him at -6 (138) for the two rounds. Unfortunately, the birdies failed to drop as regularly as yesterday for Di Nitto with just one on each nine whilst three bogeys on the back nine nibbled his lead away.

In joint third place at -5 (139) over the two days are Englishman Ben Amor and Giovanni Cravioli from Italy.  Amor carded a par round (72) for the day to stay at the same score as yesterday whilst Cravioli did -1 (71) to move up one stroke.

Hot on their heels at -4 (140) is the Italian, Michele Ortolani, who fired seven birdies for a solid -6 (66) for the day. Joining him is Frenchman Pierre Pineau who shot a bogey-free -5 (67) and five birdies. The Italian amateur, Takayuki A Matsui had an impressive seven birdy -4 (68) to complete the third-place trio.

Two Italians round off the top ten. Federico Maccario remains there in joint fourth place at -3 (141). Despite four birdies, his two bogeys and a double bogey on the 15th par 5 hole kept him at par for the day. The amateur player, Jacopo Albertoni, completes the list after a -4 (68) today.