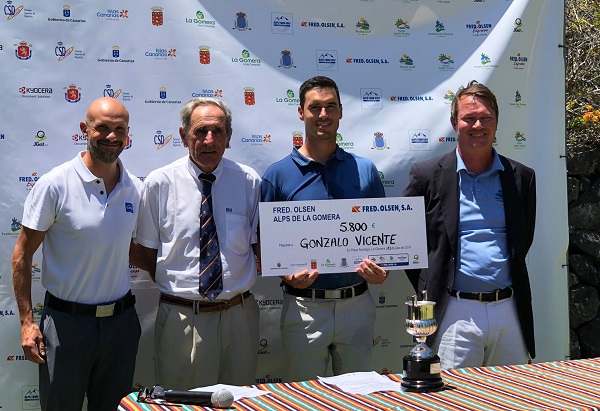 July 13th, 2019 – La Gomera (Canary Islands, Spain) – A birdie-three on the first playoff hole has decided the winner of the second edition of Fred.Olsen Alps de la Gomera on Tecina Golf : Spaniard Gonzalo Vicente Elena holed a 7-meters putt to clinch the first Alps Tour win of his career, while Frenchman Julien Foret, with a bogey, had to settle for second place.

In the very end, it was a battle between two experienced players: on one side, Vicente Elena, 35, had returned a brilliant, bogey-free 65, finishing his third round with two birdies; on the other side Foret, 36, who started the last round in 3rd position, had reached the top of the leaderboard early in the day starting the first 3 holes with as many birdies, and adding an eagle on n. 9 and another birdie on n. 11, to go as low as -16, but had then faltered with bogeys on 12 and 16 and could only match Vicente Elena’s total of -14.

“I’ve been playing well the whole tournament”, says Vicente Elena, who only last year decided to compete seriously on the Alps Tour after dedicating many years to teaching, and gained his category at the Qualifying School, “but the first day I was struggling with the putter, and also in the second round I’ve left a couple of strokes on the greens – although you can never complain when you play -7; today I came earlier to practice my putting and I teed off very confident and I kept playing like the previous days. Everything worked well and I must say I really didn’t expect a playoff, I was four strokes back with 5 holes to play, but then my two birdies and Julien’s two bogeys changed the whole scenario. In the playoff I was very concentrated and very calm, I played the hole perfect while my opponent was a bit unlucky, I must say; I felt no pressure at all, my friend Javier Ballesteros came to caddy me and we faced the hole as if we were in a practice day, and it worked!”. Now Gonzalo will have to resettle his schedule in order to try and get as high as possible in the ranking – he’s now 24th – and he decided he will play both next tournaments in Italy.

Foret, native of New Caledonia, was playing his 14th tournament this year, half of which in-money, and had collected two other top-3s in the Spring – at Abruzzo Open and Alps de las Castillas. His only Alps tour title came in 2006 in Morocco, Open de Fes, and after that he has a long list of 2nd and 3rd places in his palmarès; he’s now on 10th place in the ranking, with two more tournaments before the Grand Final and can still aim at one of the 5 places for the Challenge Tour.

Frenchman Xavier Poncelet, was happy for another good placement – 3rd solo – and for ending his round in style with birdie-eagle for a total of 200 (-13), just one stroke off playoff.

Three more tournaments are to be played this year before the Qualifying School in December, and Italy will be the stage of the last part of the 2019 Alps Tour season: from 25th to 27th July, the Nazionale Open will be played for the first time at Golf Nazionale, north of Rome; then, after the August break, players will travel to the mountains to meet again from September 5-7 for the Cervino Open, in one of the most spectacular venues, with Mount Cervino overlooking the 18 holes, 2,050 mt above sea level; then, the best 50 players in the ranking will be admitted to the Grand Final, in Rome again (17-20 October), with the goal of getting one of the 5 spots for the Challenge Tour 2020.